Safe staffing laws have been a hot topic for decades among health care workers, but the idea has become more popular recently, with the acuity level of hospital patients steadily increasing. Many nurses readily admit that they provide a better quality of care when they are assigned to fewer patients.

According to the American Nurses Association, there are currently 14 states that have regulations in place to improve staffing ratios. When it comes to nurse patient ratios by state, these regulations usually fit into one of three categories:

State nursing associations are the strongest advocates for these types of proposed legislation regarding nurse patient ratios. These professional associations launch awareness campaigns and encourage constituents to persuade lawmakers to vote for safe staffing bills. If the state has nursing unions, participating nurses may engage in collective action, such as strikes, to apply pressure to legislators. State associations also typically employ lobbyists, who advocate on behalf of nurses with state lawmakers. 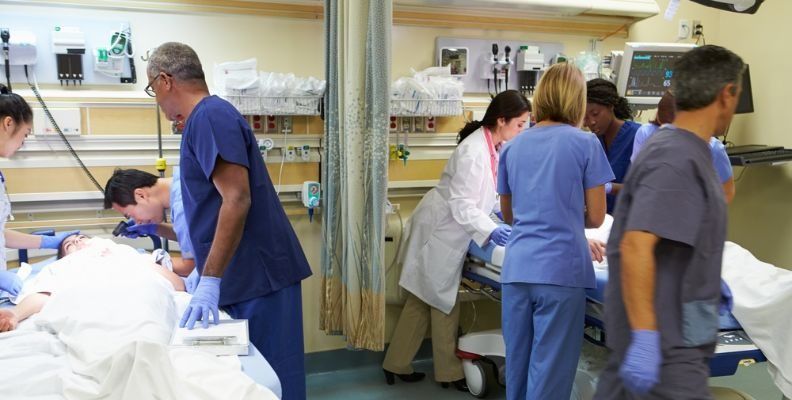 Patient advocates and professional nursing groups must exert a great deal of effort to see safe nurse staffing regulations pass into law. Hospitals and other care facilities also face challenges in instituting new policies to comply with new staffing requirements. However, recent studies have shown that mandated nurse patient ratios correlate with better outcomes. The data indicates that the extra work might be well worth the effort when it comes to patient safety and quality outcomes.

Recent studies that explore safe staffing and patient outcomes include:

Setting minimum nurse staffing ratios involves ensuring for a certain number of nurses available on a floor to care for patients during each shift. Under state-mandated nurse patient ratios, the law would limit the number of patients a nurse is required to care for. Hospital administration is then tasked with implementing a contingency plan for staff shortages that result from a high hospital census, high acuity census, or employees calling in sick.

Currently, California is the first and only state to sanction minimum safe staffing requirements for nurses in acute care hospitals. Nurses working on medical/surgical units in California care for two fewer patients than the average nurse working in other states. Nurses on medical/surgical units have a maximum of five patients at a time, and nurses working in intensive care units have a maximum of two patients.

Studies have shown that since the safe staffing laws were implemented, hospitals in California have not only demonstrated lower mortality rates but also have better nurse retention and less frequent reports of burnout when compared to other areas of the country. Nurses are more satisfied with their jobs and stick around longer, meaning that hospitals are staffed with people who have more experience taking care of patients. As such, the California nurse to patient ratio legislation is affecting moves to improve nurse patient ratios state by state across the nation.

Massachusetts is the most recent state to see nurses push for state-mandated staffing ratios. The Massachusetts Nurse’s Association (MNA) is spearheading a ballot initiative called the Patient Safety Act. Residents of Massachusetts will vote on the initiative this coming November. The MNA has been the main supporter for the ballot proposal, establishing a committee that raised $1 million in support of the bill.

Some of the most important goals of the ballot measure aim to:

This mandate would apply to all acute care facilities in the state of Massachusetts. It would not affect skilled nursing facilities or nursing homes. If passed, the ballot measures will begin to take effect on January 1, 2019.

Whether or not the Massachusetts Patient Safety Act passes remains to be seen, however the fact that it is on the ballot reflects an increased awareness of the need for safe staffing in nursing. While a recent study indicates that an initiative mandating ratios in the ICU did not result in significant changes in patient outcomes,  nurse leaders and advocates maintain the importance of nurse patient ratios statewide.

As more nurses, leaders and health care facilities move toward a sustained focus on quality-based outcomes, the attention to patient ratios and acuity-based staffing will only increase. And ultimately, if reimbursement remains tied to quality indicators, we should expect to see even more legislation that unites patient outcomes with safe nurse staffing laws in an evidence-based fashion.

Our site does not feature every educational option available on the market. We encourage you to perform your own independent research before making any education decisions. Many listings are from partners who compensate us, which may influence which programs we write about. Learn more about us