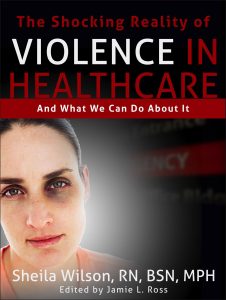 One day I received an email from a woman about an Emergency Room nurse, “Jane,” who had just been assaulted. I called Jane, and listened as she described her experience:

It had been a hectic day. I was in the office and heard a frantic bang on the nearby door. I didn’t know how or why someone could be behind that door, as it was a restricted area, but the pounding continued. I opened the door to find a woman looking anxious. As I stood in front of her I asked if I could help. I was shocked at what happened next: the woman looked at me, put her hands on my shoulders, and pushed me violently.

The next thing I remembered I was on the floor, with a medical assistant nearby trying to calm the woman down. Security personnel arrived at the scene and were able to escort the woman to the main Emergency Room.

I was shaken so badly I needed to leave the area. I told another nurse about my patients and went to the break room to sit and try to recover. I couldn’t handle this assault. Physically, I was already very sore — my shoulder was throbbing and my butt ached. Emotionally, I felt humiliated. I couldn’t believe this had happened. Worse, I knew something was wrong, and the dread I felt left me sick with worry.

“According to the National Institute for Occupational Safety and Health (NIOSH) Workplace violence is an act of aggression directed toward persons at work or on duty and ranges from offensive or threatening language to homicide.”

Jane decided to end her shift and go home, handing her patients over to another nurse. Jane knew she should have stayed and completed an incident report about the assault; she knew she could have contacted the police and filed a report. These thoughts were present, but she simply couldn’t handle what had happened. Jane cried all the way home, having to pull over to the side of the road. The pain in her right shoulder was great, but not as extreme as the pain in her mind.

Should someone have assisted Jane in filing an incident report and contacting the police to report this person who had assaulted her? Would that have been helpful?

As my conversation with Jane drew to a close, she said she would keep me informed as to how things developed. She had a medical appointment about which she was very concerned. I was unsure what her concern entailed, believing that the pain in her shoulder would have indicated she needed an x-ray, and that she should go the emergency room, and I was puzzled as to why she was waiting for an appointment with her physician instead.

About a week later Jane contacted me to report that she’d seen her physician. She was bruised, she said, and still feeling “just awful.” Many years ago, Jane told me, she’d had surgery in her right shoulder as the result of an accident. She had hardware put in and had needed to attend physical therapy for years. In fact, her right shoulder had been paralyzed for three years. Physical therapy and Jane’s shear determination had helped her regain strength in her shoulder. As we spoke, I heard Jane take a deep breath and say that when the woman pushed her down, the force had displaced the hardware in her shoulder. She believed, with dread, that this was the cause of her pain, although she fervently wished it not to be true. She was extremely distraught over the thought of needing further surgery at some point.

Months passed since the assault, and Jane had still not returned to work. I wasn’t sure if she was collecting workers’ compensation; she didn’t share that with me. She did disclose, however, that no one from administration had contacted her to inquire how she was doing, although some of Jane’s coworkers had called, asking how she was and did she need anything. She told me that she’d never filed the incident report or a police report, and that in fact she had forgotten the individual’s name that had assaulted her.

Importance of the Healthcare Advocate

When a healthcare worker is assaulted, imagine if someone were to assist the victim – a non-administrative advocate. This healthcare advocate could assist in filing an incident report and a police report; speak to risk management with her; go to employee health; and perhaps even attend court with her.

It is my belief that underreporting is due to healthcare worker misconception of workplace violence; “It isn’t that bad; he didn’t mean it; the patient was inebriated; she said she was sorry.” Or perhaps the worker assumes there is global indifference; “Who cares? No one does anything about it.”

With an advocate in place, there would be a non-administrative point-person designated to check in with the victim frequently, communicate with staff, conduct ongoing education and outreach, and foster a sense of security and right to safety for healthcare workers.

It is my hypothesis that empowering victims of violence by supporting and guiding them through the reporting process may begin to lift misconceptions about workplace violence, and, perhaps, decrease the frequency and/or severity of its occurrence.

Editor’s Note: As nurses, we are at risk of workplace violence every day. Awareness and advocacy are two of the most important tools we can use to help one another and to minimize the likelihood of an assault or incident. We would love to hear about how you PREVENT VIOLENCE and SUPPORT VICTIMS in your own facility. Leave your comments below to start the conversation.

You can also be a leader in the field of nursing by expanding your education and using it to implement violence free work zones.